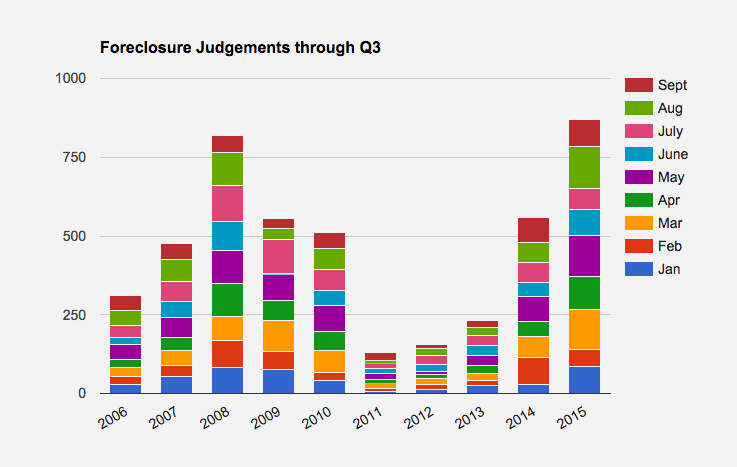 A Foreclosure Judgement or Judgment of Foreclosure and Sale is the last step in the foreclosure process. After this is signed and entered the bank may publish notice of the auction in a local newspaper with an auction date. The properties in Westchester County set for auction are auction in the lobby of the Supreme Court in White Plains. So the surge in Judgments is a direct result of foreclosure actions that have languished for years finally reaching their conclusion. Some of these cases have been going on for 5 years or more.

Additionally, the foreclosure process in Westchester has improved, shortening the timeframe in many foreclosures resulting in more judgements.

I get numerous phone calls every week with homeowners asking what they can do now that they have received an auction date. The options are limited. You can always file bankruptcy but that will generally only buy a few months. The chances of having the time to get a loan modification are also very slim. One way we have been able to stop the sale is to get the property listed right away and try to get in contract in enough time before the sale so as to have the bank cancel the auction.

I spoke with a bank attorney the other day regarding all these new foreclosure cases. I was told that many if not the majority of these new cases were people defaulting of previous loan modifications that they received. Over the years we have seen many people accept loan modifications that really stretched their ability to afford to keep their homes. Most homeowners still accept these because they want to keep their homes and this in many instances is the only way to do that. Many families have still never fully recovered from the financial crisis of 2008 and 2009.

So going forward we expect to see the increase in Judgments and new filings at a high lever keeping the foreclosure crisis going with no real end in sight.

Last year, foreclosures weren't a worry primarily due to the moratoriums in effect. Despite the removal of the COVID-19 pandemic provisions, the ...
Read More →

It doesn’t matter if you are purchasing a home or refinancing your existing mortgage; closing costs are a part of ...
Read More →